Emma as a Microcosm of English Society and other Matters 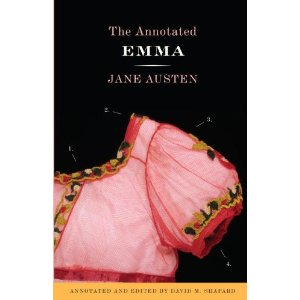 May 4th was a lovely spring day, the air was warm, the sun was shining, and the campus of Columbia University was abuzz with activity. I was there to attend the Spring Meeting of the Jane Austen Society of North America (JASNA) and hear the lecture “Emma as a Microcosm of English Society”. The speaker was David M. Shapard who has published the annotated versions of Pride and Prejudice, Sense and Sensibility, and Persuasion. His The Annotated Northanger Abbey will be released on September 13, 2013. And can one assume that he is hard at work on the annotated Mansfield Park? Let’s hope so!  [hint, hint Mr. Shapard]

Emma is my least favorite of all of Jane Austen’s books. I can’t stand the title character, she’s annoying, self-righteous, and a meddler. Austen herself wrote, “I am going to take a heroine whom no one but myself will much like” to describe her irritating protagonist. I’ve always wanted to throw this book across the room with violent force but now having heard Mr. Shapard speak, and so passionately about, I am desiring to re-read the book and perhaps re-examine the microcosm of society which Austen presents.

Emma is the only Austen novel named for its main character. Shapard suggests this is by design as she is the novel’s primary focus, Emma is the most flawed of all of Austen’s heroines and her failings affect herself as well as lead to detrimental situations for others. Her missteps, of which she is totally oblivious of, is what drives the plot. “This concentration, and the dominance of the action by a flawed heroine, allows for a superb joining of plot, character, and theme” [Shapard: Introduction The Annotated Emma, page xxv]. Each action within the novel evolves the plot revealing her character and her moral irrationality. And all the while as I read the book, I want to punch Emma in the nose because I see that she is being an idiot as we are meant to. Well, perhaps Austen didn’t envisage her readers wanting to do violence to her heroine but she did intend for us to notice her folly as Emma herself does not.

Mr. Shapard then turned his focus to the main idea of his discussion, the book’s depiction of the society in which Emma lives. Highbury boasts a complex society, its nuances properly understood and accepted by  Austen’s contemporary readers:  who was genteel, who was not, who has fallen from the refined life and those who have risen to it, those of questionable birth, those who work the land, those in trade, the nouveau riche and those in need. Austen describes a stable society and one in which the social hierarchy is marked and described in detail. There is limited social change and forms the important backdrop for the action of the novel and gives the reader a real sense of place and the day-to-day of country living.   Mr. Shapard maintains that the novels dual focus of the individual and the social world reinforces each other “the precise delineations of the world around the heroine make her misjudgments of that world more vivid for the reader.” [Shapard: Introduction The Annotated Emma, page xxix].

It was an informative lecture and one that opened my mind about how I should read Emma. Mr. Shapard has convinced me that, perhaps, I have underestimated Emma, my good judgment clouded by my displeasure of Emma’s lack of insight.  I will read it again.

The rest of the meeting was given over to the discussion of a short story “Poor Emma” written by the late Reginald Hill and published in his book There Are No Ghosts in the Soviet Union.  I do not know much about Reginald Hill except that his genre was crime writing and he was a purported “Janeite” so I was quite eager to read his sequel to Emma.  I have to say I was absolutely horrified by it which my marginalia on the copy I read will greatly attest.  As I was reading I could not help think what a travesty it was.  And that’s saying something because, as I said earlier, Emma is my least preferred book.  My favorite character, Mr. Knightley is now a drunken, obese, slothful, and loutish wretch of a man.  In a few years of marriage Mr. Knightley has turned his back on responsibility and become a truly debauched individual, a complete 180° in temperament and character.  But as I continued to read I began to take the story for what it was, a parody, and one which was written tongue in cheek.  I was even able to laugh at the story and myself for my severe reaction.  I am not a fan of Hill’s Mr. Knightley (or his Emma for that matter) but it is clever how he used his crime writing skills to exploit Emma’s habitual convention of scheming and manipulation and using her machinations, for once successful, for the most diabolical (and amusing) of ends.

The meeting ended with lots of catching up and talking Jane with my fellow enthusiasts, cucumber sandwiches and tea, and having David Shapard sign my copy of The Annotated Emma and being totally awkward as I told him that I bought his annotated P&P for my niece.  It was the perfect spring day with an abundance of delightful diversion.