Fallen Women of the Regency: Mistresses, Courtesans, and Prostitutes

A Harlot’s Progress: The Harlot Deceiving Her Jewish Protector by William Hogarth, 1732

“I could not trace her beyond her first seducer, and there was every reason to fear that she had removed from him only to sink deeper in a life of sin.” (Sense and Sensibility, ch. 31)

As a writer, Jane Austen does not shy away from the topic of sexual indiscretion and its consequences for women.  Three of her six published novels, Sense and Sensibility, Pride and Prejudice, and Mansfield Park, tell of the risks that befall females who step outside the bounds of social propriety.  Whether they pursued, without thought of consequence, the rousing attentions of men or were unsuspecting impressionable victims of exploitative rakes, a woman’s position was precarious, their sexual purity a commodity in the marriage market, and any stain upon that reputation devastating in its ramifications on inheritance, status, and prospects.  Regency society pardoned and even tacitly condoned licentious behavior in men yet censured “fallen” women, labeling them mistresses, courtesans, and prostitutes. 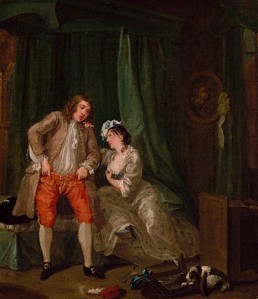 Colonel Brandon’s description of the tragic story of Eliza Williams in Sense and Sensibility suggests a realm not usually associated with Jane Austen.  A study of Austen’s novels and letters, biographies of courtesans and mistresses of the period, as well as contemporary documents it is possible to illuminate a world that exists upon the periphery of Austen’s writing.  In an era when women had no social authority or control and were susceptible to the power of the men around them, the women of the Regency demi-monde ranged from poverty-stricken to very powerful. Accruing wealth, running their own households, obtaining the trappings of society without ever gaining access to “polite” society, those women at the fortunate end of the spectrum dominated the realm of the “half world” and, despite their scandalous existences, became arbiters of style and fashion. 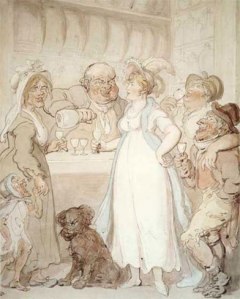 On October 5, at the 2012 AGM of the Jane Austen Society of North America, I will present my research which investigates the position of mistresses, courtesans, and prostitutes of the Regency.  Any one of Jane Austen’s heroines could have ended up in a career of vice had they succumbed to sexual recklessness.  The unthinking, like Lydia (had Mr. Darcy not intervened) might have ended up a darling of Covent Garden with an entry in Harris’s List .  Others, like Elizabeth, may have used their charms to gain the adoration of powerful men, playing them against one another to gain wealth, power and control.  It is this parallel world to Jane Austen’s well-mannered drawing rooms, existing yet hidden, a very real possibility for any woman, that will form the basis of my lecture.

3 Comments to “Fallen Women of the Regency: Mistresses, Courtesans, and Prostitutes”