Quote of the Day: Walt Whitman

Why I gave up on ""Fear and Loathing in Las Vegas" by Hunter S. Thompson"

I didn’t so much as give up on Fear and Loathing in Las Vegas as I couldn’t get started!  I am not sure why exactly except the mood I was in couldn’t take the characters and their perpetual state of impairment.  I had no patience for it; perhaps I’ll pick it up again when I am in a better mood.

Quote of the Day: Ernest Hemingway

“Books are not made for furniture, but there is nothing else that so beautifully furnishes a house.”  Henry Ward Beecher, 1813–1887

It is raining, and not just raining but pouring!  Bucket after bucket of water pouring off the rooftops so loudly it sounds like a gentle roar on my apartment’s ceiling.  The spray as cars drive by, the individual drops off my fire escape sounds like a shower left to run.  Most people see a day like today as dreary and depressing, there are times when I do too, but on a lazy Sunday I am looking forward to reading.  I will roam from bedroom to living room and curl up on the bed or sofa and indulge myself in a good book.

Today I happen to be reading Ursula K. Le Guin’s The Wind’s Twelve Quartersa book of 17 short stories each introduced by the author.  It is a great read for a day such as today because an intense commitment is not necessary as with a novel.  A story can be finished, the book put down (albeit temporarily) after all one does have to eat.  And for some reason, rainy days have always been good days to read stories of fantasy, magic, and science fiction.  I don’t know exactly why that is but I like to imagine that as the rain cleanses the earth, stories that have a magical element cleanse the mind and open it up to possibilities beyond the mundane.  Too romantic, I know.

It is days such as this when I reflect on all the books too good to just molder on shelves, or in my case piled on floors in front of over-filled bookshelves, books that should be read again and again.  A few favorites come to mind, Jane Austen for example.  All her books (Juvenilia and letters) can be read over and over and never become stale.  There is not a year that passes that I do not reread one of her books (or more); one year focusing on plot, another on character, and yet another on the period in which the stories take place (things that Austen would have taken for granted that her reader’s would know).  Others include, Tolkien, Bronte, Doyle, Hardy, Shelley, and Lewis.  A rereading of To Kill a Mockingbird by Harper Lee is essential if only for its lessons on the wrongs of racial inequality and the integrity of its hero, Atticus Finch.  This is a book on how we should behave but seldom do.

My list has changed over the years, evolved.  When I was 16 I reread A Room with a View so many times that the cover is in tatters and now I barely give it a second glance; not because it isn’t a wonderful book, it is, but now with more decades under my belt than I care to admit it doesn’t speak to me in the same way as A Tree Grows in Brooklyn does.  That is the beauty of books, they evolve with the reader.  For example, D.H. Lawrence’s Lady Chatterley’s Lover.  First read when I was 12 or 13 1) because it was on a banned book list and 2) I was curious about sex.  When I first read it I was titillated by the frank descriptions of copulation and didn’t remember much beyond that.  I reread it again in my early 20s, now living with a boyfriend, and found myself bored by the book, my lack of innocence relegating the book to a place of stuffy indifference.  I recently reread it yet again, a middle-aged woman separated from her husband in the midst of divorce, and finally “got it”; understood what Lawrence was trying to convey in this story:  a wholeness of life is necessary in the pursuit of happiness.  Well, at least, that’s what I “got” from it.

Here are ten books that I believe should be read again, again, and again, ad infinitum.

Wow!  That was harder than I thought it was going to be.  I am happy to say that my list has 6 women authors; is somewhat well-rounded, consisting of classics, fantasy, and science-fiction (Frankenstein); and has American and English (and one Danish) authors.  These are books I consider worth rereading and probably says more about me personally at this particular moment in time than anything else.  Your list may be different.  Reader, I would love to hear about the books you think are worth rereading and why.  Leave a comment, I would really like to know.

Okay, now I have to get back to reading!

Quote of the Day: Erasmus Cultivation of the Earth and Mind 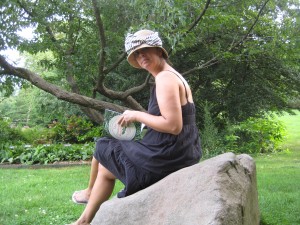 Today I visited The Brooklyn Botanical Garden (BBG) with my son and his friend.  I know that this doesn’t sound initially like it has anything to do with books or reading but bear with me.  It was the most beautiful day, the sun was shining and a delicious cooling breeze was blowing, I wandered through this most perfect of botanical gardens, watching the boys enjoy the delights of this place, I couldn’t help but think of how wonderful it would be to have a tract of land like this.  It has dozens of wonderful places to sit, be in nature, and read.  The scents of the plants, the flowers, the herbs and the gentle sounds of the rustling trees offer an idyllic landscape for literary pursuits. Today,the highlights were the Herb Garden and the Shakespeare Garden.

The Herb Garden is a magnificent planted prospect of vegetables, fruits, and herbs.  It had this city

dweller dreaming of one day having a garden of her own.  The book, Designing an Herb Garden, published by the BBG will inspire my dreams.  But for now, I have to settle for potted herbs at the windows of my apartment, my local CSA, and farmer’s markets.  To this end, The Locavore’s Handbook:  The Busy Person’s Guide to Eating Local on a Budget by Leda Meredith will keep me happy. 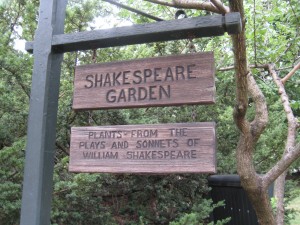 The Shakespeare Garden is a special place and pretty popular given the amount of people in this small garden today.  I suppose the Bard seizes people’s imaginations even in the heart of Brooklyn.  It is a cottage-style garden abundantly planted with over 80 flowers, herbs, shrubs, and trees that appear in Shakespeare’s works.  The beds, bordered by twig wattling, were lush on this late Summer day and had this reader thinking of the words that inspired such a delightful and magical place.

“I know a bank where the wild thyme blows,
Where oxlips and the nodding violet grows,
Quite over-canopied with luscious woodbine,
With sweet musk-roses, and with eglantines.”
A Midsummer Night’s Dream, Act II, scene 1

Ever since finishing Lev Grossman‘s The Magicians I wondered if another foray into the land of Fillory was possible.  And with the recent release of The Magician King my question and hopes have been answered.  I look forward to getting my hands on this book…I feel it will be a perfect read for crisp autumn evenings, curled up on the sofa, wrapped in a blanket with a nice dram of whisky.  That’s right, save the tea for Harry Potter!  If the first book was any indication, The Magician King, promises to be quite a wild ride.

The Magicians started off slowly with the angst-ridden Quentin Coldwater mysteriously stumbling upon a hidden school for magic and discovering he has an untapped knack for hoodoo. Comparisons to the Harry Potter series are inevitable but veer off jarringly with drinking binges, sex, and drugs combined with an extreme curriculum in spell casting. It devolves into the drug and alcohol induced seeking of wisdom; a quest much like that perpetuated by Jim Morrison, alarmingly so.  All this with the subtext that the childhood books so beloved by Quentin, a wonderful land of talking animals and mystical magic is actually a real place; a hard-core Narnia, if you will.

The first book dealt with forms of escapism, the destructive power of getting what one wants and not necessarily what one

needs, and discovering that one’s fantasies can be dark and lurid.  And yet, when the “trip” is over, all of life’s obstacles (both real and fantasy) are still painfully present and personal responsibility must be acknowledged and reckoned with.

I have stayed away from reading any overviews or editorial reviews of The Magician King, preferring to come to the story fresh and unadulterated, but I presume it will be more of the same but different and better.  I look forward to settling down (with my whisky) and crossing into this not-so childhood fantasy.

Quote of the Day: Howard Pyle

“The stories of childhood leave an indelible impression, and their author always has a niche in the temple of memory from which the image is never cast out to be thrown on the rubbish heap of things that are outgrown and outlived.”  Howard Pyle, 1853–1911

Quote of the Day: Thomas Jefferson